academics.lmu.edu > The Idea of the University > Events and Programs > Jan. 30: Archbishop Gomez

In this section
play video

LMU and Place Series: “A Conversation with Archbishop Gomez”

Loyola Marymount University cordially invites you to join President Timothy Law Snyder, Ph.D., for a celebration to honor José H. Gomez, Archbishop of Los Angeles. The university will bestow upon him an honorary Doctor of Humane Letters in recognition of his leadership role with the United States Conference of Catholic Bishops and his dedication to immigration reform, social justice and the future of Catholic education. Archbishop Gomez exemplifies LMU’s highest values, and we are pleased to pay tribute to his commitment to public service with the university’s greatest honor.

The evening will begin with the honorary degree conferral ceremony followed by the Archbishop’s lecture in support of the Academy of Catholic Thought and Imagination’s conversation on “The Idea of the Catholic University in the 21st Century.” He will speak on the particular charisms and obligations of the Catholic university in the contemporary context, with particular attention to Southern California. Finally, he will participate in a Q&A discussion facilitated by Dr. John Sebastian, Vice President of Mission and Ministry, and Dr. Jeanne Ortiz, Dean of Students. Reception to follow.

Registration is free and open to the public. Complimentary on-site child care is available. Please use the registration form below.

Most Reverend José H. Gomez is the Archbishop of Los Angeles, the nation’s largest Catholic community. He also serves as Vice President of the United States Conference of Catholic Bishops. In his ministry, Archbishop Gomez encourages people to follow Jesus Christ with joy and simplicity of life, seeking to serve God and their neighbors in their ordinary daily activities.

For more than a decade, Archbishop Gomez has been a voice of compassion and reason on moral and spiritual issues in American public life and culture. He has played a leading role in the Catholic Church’s efforts to promote immigration reform and is author of the 2013 book, Immigration and the Next America: Renewing the Soul of Our Nation.

Archbishop Gomez is currently serving a three-year term as Vice President of the United States Conference of Catholic Bishops, a post he assumed in November 2016. He is also currently a papal appointee to the Pontifical Commission for Latin America. In 2012, Pope Benedict XVI personally selected him to participate in a month-long “synod” or meeting of the world’s bishops on the “New Evangelization for the Transmission of the Christian Faith.”In 2015, Archbishop Gomez was selected to represent the United States Catholic Bishops at the World Meeting of Families and the Synod of Bishops on “The Vocation and Mission of the Family in the Church and in the Contemporary World.”

Archbishop Gomez urges every Catholic, in all walks of life, to assume responsibility for the mission of the Catholic Church. He has worked to promote marriage and the family and vocations to the priesthood. He has been instrumental in promoting the leadership of Hispanics and women in the Church and in American society, as a founding member of the Catholic Association of Latino Leaders and ENDOW (Educating on the Nature and Dignity of Women).

Archbishop Gomez is a native of Monterrey, Mexico, and a naturalized American citizen. Prior to becoming Archbishop of Los Angeles, he served as Archbishop of San Antonio (2005–2010) and Auxiliary Bishop of Denver (2001–2005).

He holds a doctorate degree in theology (S.T.D.), as well as undergraduate degrees in accounting, philosophy and theology. He speaks and writes often on issues in the Church and American society. Among his books are: Men of Brave Heart: The Virtue of Courage in the Priestly Life (Our Sunday Visitor, 2009) and A Will to Live: Clear Answers on End of Life Issues (Basilica, 2008).

He has contributed introductions and essays to numerous books, including: Catholics in the Public Square, 4th ed., by Bishop Thomas J. Olmsted (St. Benedict, 2016); The Love That Made Mother Teresa by David Scott (Sophia, 2016); Fire from Above: Christian Contemplation and Mystical Wisdom by Anthony Lilles (Sophia, 2016); Dorothy Day and the Church: Past, Present and Future, ed. Lance Richey and Adam DeVille (Solidarity Hall, 2015); What Did Jesus Ask: Christian Leaders Reflect on His Questions of Faith, ed. Elizabeth Dias (Time, 2015); Tweeting With God by Michel Remery (Ignatius, 2015); The Heart of the Diaconate, by Deacon James Keating (Paulist, 2015); The Feasts: How the Church Year Forms Us as Catholics, by Cardinal Donald Wuerl and Mike Aquilina (Image, 2014); For Greater Glory: The True Story of Cristiada, The Cristero War and Mexico’s Struggle for Religious Freedom by Ruben Quezada (Ignatius, 2012); Hispanic Ministry in the 21st Century: Present and Future, ed. Hosffman Ospino (Convivium, 2010).

During the spring 2018 semester, ACTI will take up several topics that are of particular relevance to LMU in its particular physical, historical, and societal location.  The "LMU and Place" series asks participants to consider the challenges and opportunities that face us in virtue of our placement here and now, including the necessity of grappling with contested and problematic historical legacies; the ethnically and religiously diverse, and largely immigrant, context of Southern California; and the interplay between LMU's institutional Catholic and Jesuit identity and the increasingly pluralistic demographics of its faculty, staff, and students.  Other "LMU and Place" events: "Coming to Terms with the Past" and "Diversity and Difference at the Catholic University." 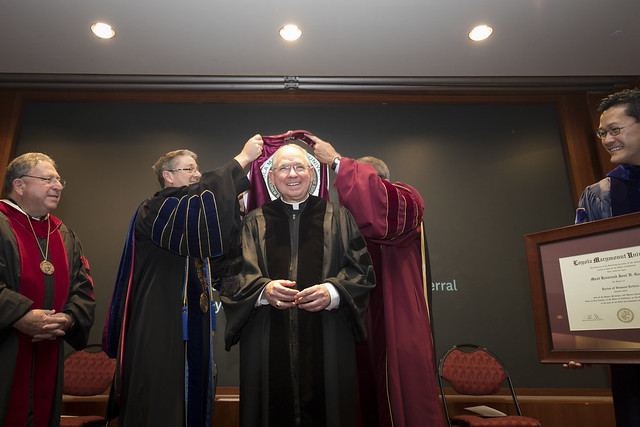