Stereotypes and false assumptions can make our differences seem bigger than they are. Led by award-winning CNN Anchor, Carol Costello, Project Citizen examines the political/cultural divide in America. Blended student teams from the West Coast and Midwest learn from each other through collaboration and team building. Together students explore ways to restore civility in America and throughout the world.

The First Amendment is part of our American identity. Free speech is our constitutional right and one of our heaviest responsibilities.

It gives storytellers of all kinds the ability to speak truth to power without the fear of censorship by the government.

But the first amendment is more than a legal doctrine, it's about the character of our society, the willingness to live with discord and uncertainty, and to recognize the importance of compromise.

It's a simple, yet effective concept - bring together students from disparate backgrounds - in this case, a red state (Ohio/Kent) and a blue state (California/LMU) and instruct the students, together, in the same classroom.

In Summer 2019, LMU and Kent State University conducted our first joint class. We challenged 12 (6 LMU, 6 KSU) students to talk about their political differences, the stereotypes each group held about the other, and how those things are dividing our country.

The Kent students flew into Los Angeles and LMU first. They were clearly uncomfortable. They sat in one corner of the classroom, and the LMU students sat in the other. Still both groups, after rigorous instruction, opened up and talked frankly about polarizing topics: religion, politics, the blame-game, and more.

At the end of that first class, the students were asked to record one another, on camera, about their first impressions.

Did you notice how shallow their characterizations were? That became achingly apparent in a separate written assignment. They were told that their written impressions of one another would be kept secret. Here's a sample:

"The Midwest is entirely farmland..."

"Everyone in the Midwest is a redneck and drinks cheap beer..."

"Everyone in Cali is a stoner who wants to make money off their looks..."

But you really should hear it for yourself from the students:

Our students, whether from Kent or LMU, have a decidedly pessimistic view of the American Dream.

"Today, the American dream is seen as less of a possibility...[there are] limited opportunities for improvement, and overall dissatisfaction with the state of American society."
- Sara, LMU

"While each person has a different definition of what the American dream is, it seems that every American strives to have a stellar social media profile."
- Jayne, LMU

"I believe that the American dream is very subtle propaganda that paints the picture that America is this thriving nation."
- Quentin, KSU

Together – in California and in Ohio – our students explored why they felt this way and, most importantly, why their country is so bitterly divided. We invited guests to talk with us, including Father Greg Boyle from Homeboy Industries, KABC radio's Mo'Kelly, Hollywood executive Steve Mosko, Rock Journalist Annie Zaleski, and the editorial staff at the Youngstown Vindicator in the rustiest of Rust Belt Ohio. We also talked with Trump supporters while covering their protest rallies and talked with different kinds of voters at Pro-Choice, Pro-Life, Gay Pride and anti-Gay rallies.

The students' final project consisted of a four-minute video on stereotyping, the country's divide or ways to bring the country together. The winning group of students, 2 from LMU and 2 from Kent, set up interviews with former gang members, went to their homes and produced this amazing video: 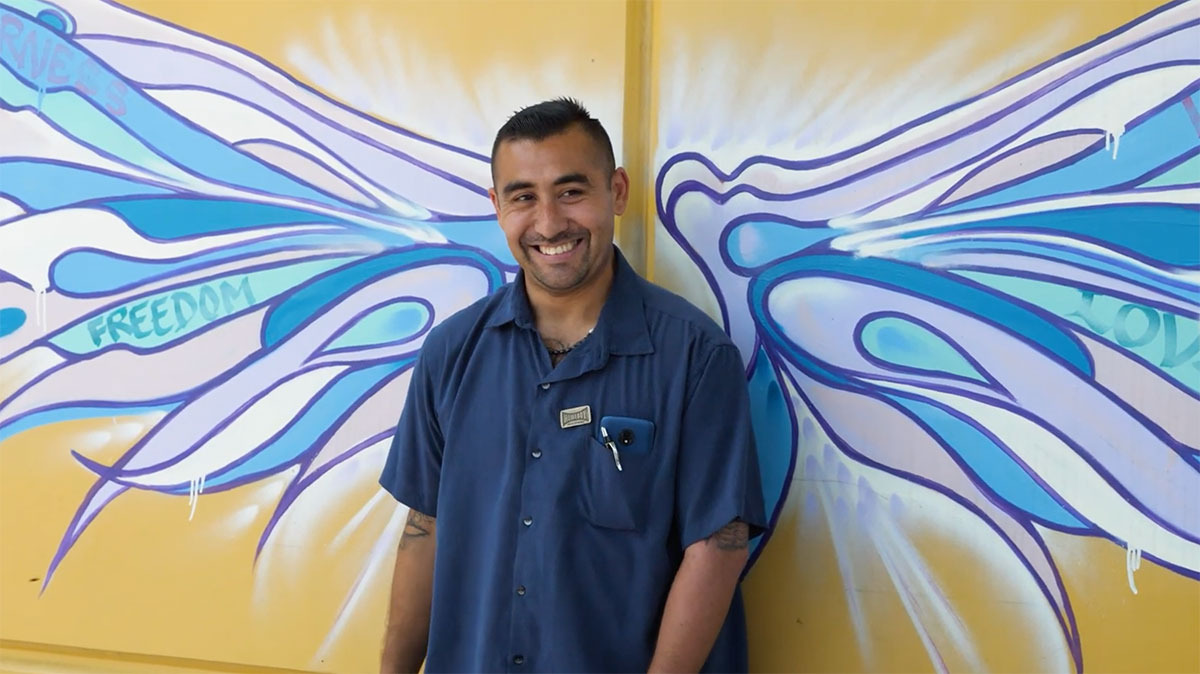 "It [the class] opened my eyes to the fact that I shouldn't be so quick to think that someone who has different beliefs than mine is going to judge me because of the way I live my life. That fear of judgement can be just as divisive as the judgement itself because it prevents you from being willing to share your worldview and culture with people who don't come from the same background."
- Izzy, LMU Senior

"It's obvious to me that there is no one side to blame for how polarized this country has become. Every side (far-left, moderate, far-right, alternative groups, etc.) use divisive language and are furthering the division between political viewpoints. I think this is a reaction, not to the dislike of one another, but rather a reaction out of fear. A fear of losing what one thinks is right and best for America — though those opinions differ widely on whether or not Trump is ruining these ideals or upholding them."
- Sara, LMU Senior

We also recorded their thoughts about what learned in Kent's TV2 studio: