Candice Cross is a junior biology major and McNair Scholar at Loyola Marymount University. She focuses on marine biology/ecology and plans to pursue a Ph.D. after her time at LMU. During summer 2017, she participated in The Bay Foundation's 6-week summer internship studying the rocky intertidal zone of Point Fermin. Her work focused on mapping the micro-topography and assessing the biodiversity of the site to determine the impact of climate change on the intertidal. She also examined Surfgrass distribution in the lower and mid intertidal to determine the importance of Surfgrass restoration efforts. Pictured here is a photo of Candice at Point Fermin holding her favorite intertidal animal, a California sea hare.

Having grown up on the ocean, frequenting the Point Fermin tide pools as a child, Candice valued her opportunity to go back and use this site to further kindle her passion for marine science. She enjoyed the hours of field experience and the journey of developing her data into a meaningful study. Her project was one of many ecological assessments along the California coast featured in the launching of the Coastal Research Institute, a new partnership between The Bay Foundation and the Frank R. Seaver College of Science and Engineering.

During the year, Candice continues her own research in the biology department, in collaboration with Dr. Demian Willette, studying an invasive seagrass in the Caribbean. Through further field and lab work, she hopes to better understand marine ecosystem dynamics in order to inform conservation efforts.

Marisol Castellanos is a junior in the McNair Scholars program who is working towards her Bachelor of Science in Electrical Engineering (Computer Engineering emphasis) and minor in Biology. Marisol originally attended UCSD for her freshman year in College, but decided to join the LMU community in order to be closer to her family. Marisol's time at LMU has been anything short of ordinary. Thus far, Marisol has been to El Salvador as a Co-Manager of the Sawyer Filter team and she traveled to Germany as a part of the LMU Study Abroad Program where she was able to learn the basics of the German language. 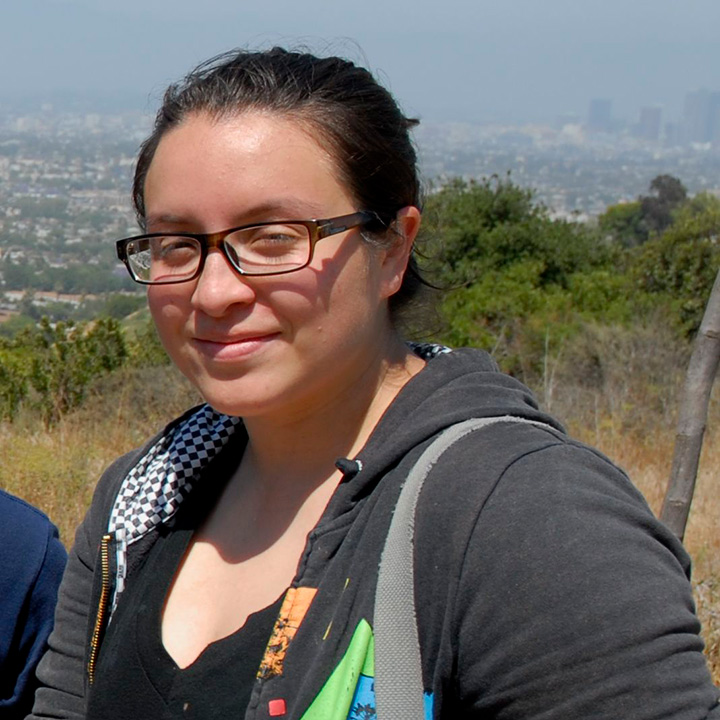 Since Marisol's first day at LMU she has involved herself in various projects around campus; to name a few, Marisol is the vice president of the Society of Hispanic Engineers, a member of the Scientific Research Society and was the treasurer of the Tri Beta National Biological Honor Society. Beyond her involvement in campus organizations, Marisol has been the recipient of several scholarships including the Benjamin A. Gilman Scholarship, the Congressional Hispanic Caucus Institute Scholarship, and the Great Minds in STEM scholarship. Marisol is a RAINS undergraduate Research Fellow and a Sigma Xi Scholar. Marisol is also working to re-start the pre-veterinary club on campus.

Most recently, Marisol received the Santa Monica Bay Audubon Society grant in order to fund her research study on the, "Use of Harmonic Radar to Track the Movements of Male Trapdoor Spiders at Kenneth Hahn State Recreation Area," under the mentorship of her advisor Dr. Martina Ramirez. The Harmonic Radar (HR) Marisol uses can estimate the dispersal capacity of organisms. The HR system involves the use of a hand held transceiver and a small antenna which reflects the transceiver signals at double the harmonic frequencies. A tag is placed on an organism which provides a unique signal allowing for its location to be tracked. So far, tracking of spiders has utilized radio transmitters and has focused on large male tarantulas, and not much is known about the movement of other species. With the grant funds recently received, Marisol plans to purchase a transceiver to construct her own antennas and conduct her research on the male Trapdoor spider.

Research has been a significant part of Marisol's academic life since high school. While attending City Honors High School Marisol was involved in the robotics program and also took on an internship at UCLA during her junior year of high school. It is of no surprise that Marisol has been actively involved in research here at LMU and plans to pursue research in her future graduate studies. Marisol credits her love for problem solving which routed her to the field of engineering. Marisol strongly believes that advancing technology improves the quality of life for human beings, "Engineering is not just engineering, rather it's a field of knowledge that uses many other disciplines too, as engineers we get to take what we learn in engineering and apply it to daily life in really big ways." In thinking about her future plans for graduate school, Marisol plans to obtain her Doctor of Veterinary Medicine (DVM) with a PhD.

Congratulations Marisol on receiving the Santa Monica Audubon Society grant and on all of your successes here at LMU!

Cheyenne Weinstein is a senior Psychology major in the McNair Scholars Program at Loyola Marymount University. Her interest and passion for psychological research has driven her to not only engage in research projects on campus, but to also create her own study. Cheyenne was first introduced to research during her sophomore year by Dr. Nora Murphy who was impressed by Cheyenne's urge to better understand psychology.

Cheyenne became a research assistant in Dr. Murphy's lab and was quickly promoted to the position of lab manager by the end of that year. Cheyenne's focus, drive, and inherent curiosity about psychological research led her to join the McNair Scholars Program during her junior year. Cheyenne decided to pursue her interest in Lifespan and Developmental Psychology as she considered her options for continued research at LMU and future graduate programs. Her interest in aging and its link to psychology is what drove her current research project which examines how age relates to willingness to seek mental health services. Many undergraduate students who are involved with research at LMU typically work on a project or study that has been designed and organized by either a graduate student or professor. Cheyenne is unique in that she has taken the lead in designing and conducting her study.

By exploring the link between age and one's prejudice towards and willingness to seek mental health services, Cheyenne hopes to uncover new ways to help and encourage people to seek services. Cheyenne's experience with this study has not only developed research skills, but built her confidence as an independent researcher. Cheyenne plans to obtain a Ph.D. in Gerontology or Geropsychology. She has yet to decide whether she wants to pursue clinical psychology or remain in academia.

Abbie is a kindergarten student who suffers from cerebral palsy, which makes muscle coordination and reflexes difficult for her. But a team of engineering students from LMU developed a device to help her use her iPad more efficiently, perhaps pointing the way toward other inventions that could help children like her.

The device is part of a yearlong, senior capstone project for students in the Frank R. Seaver College of Science and Engineering. Eight mechanical engineers in two teams are designing and building products to help disabled children function more independently. The project culminated in submission of the designs to the annual Rehabilitation Engineering and Assistive Technology of North America's student competition, where the team placed third in June.

"Both teams have solid designs and a good understanding of the design process," said Matt Siniawski, mechanical engineering professor and the students' faculty adviser. "This project lets the students use their education to help benefit someone else's life, and it opens their eyes to different parts of engineering."

Each of the two teams is paired with one student from WISH Charter Elementary School, a member of LMU's Family of Schools. The teams met with the student, the student's mother, the principal and caretakers to brainstorm ideas for an apparatus that would best suit the student's needs.

One team worked with Jack, a fifth-grader at risk of developing problems with his Achilles tendon because he uses a wheelchair. The students built Jack a bicycle-like attachment that will move his legs around and prevent shortening of the tendon.

Team Abbie developed what they're calling the iPad Dexterity Enhancement Apparatus, which connects her wrist and forearm to a brace that restricts the range of motion in her hand. It's helped her use the iPad more easily in class.

"I.D.E.A. will improve the accuracy and precision of Abbie's fine motor skills without inhibiting her comfort," said Amy Clancy '13, a mechanical engineering student when the device was developed. "We hope it improves her confidence and helps her to perform basic functions more easily."