academics.lmu.edu > The Idea of the University > Events and Programs > Jan. 18: Coming to Terms with the Past

In this section
play video

LMU and Place Series: “Coming to Terms with the Past: The Catholic University and Historical Legacy”

Many universities in the U.S. must contend with institutional legacies bound up with injustice and oppression. Given the Catholic tradition’s emphasis on justice, mercy, and reconciliation, as well as Southern California’s colonial history, LMU’s call to engage with contentious pasts is particularly imperative. Our speakers include Dr. Marcia Chatelain, a member of Georgetown University’s working group on “Slavery, Memory, and Reconciliation”; Dr. Traci Brynne Voyles (LMU); and Amanda Wixon (UC Riverside). Georgetown University’s experience of grappling with its legacy of slavery, racism, and exploitation provides a useful model to consider as we reflect on LMU’s and Los Angeles’ past and present. This program is an excellent opportunity to acknowledge and respond to our own historical legacy in a way that promotes constructive dialogue, reconciliation, and justice.

Marcia Chatelain, Ph.D. is an Associate Professor of History and African American Studies at Georgetown University. The author of South Side Girls: Growing up in the Great Migration (Duke University Press, 2015), Chatelain is a public voice on the history of African American children, race in America, as well as social movements. In 2014, Chatelain organized her fellow scholars in a social media response to the crisis in Ferguson, Missouri, entitled #FergusonSyllabus. #FergusonSyllabus has led to similar initiatives online and has shaped curricular projects in K-12 settings, as well as academia. A frequent public speaker and consultant to educational institutions, Chatelain delivers lectures and workshops on inclusive teaching, social movements, and food justice. Chatelain has contributed to TheAtlantic.com, Time.com, Ms. Magazine, and The Chronicle of Higher Education, and she has also been quoted in articles in the New York Times, the Chicago Tribune, the Washington Post, and the Chronicle of Higher Education; she has appeared on local television and national outlets including C-SPAN, MSNBC, CNN, BBC-America, and PBS. Chatelain hosts, “Office Hours: A Podcast,” in which she talks to millennials about what is most important to them. Chatelain is a proud graduate of the University of Missouri-Columbia, where she was a Harry S. Truman Scholar, and she holds a Ph.D. in American Civilization from Brown University. In 2016, Chatelain was named a “Top Influencer in Higher Education,” by The Chronicle of Higher Education. She is currently the Eric and Wendy Schmidt Fellow at the New America Foundation in Washington, D.C. During the 2017-2018 academic year, Chatelain will be on leave from Georgetown as a National Endowment for the Humanities Fellow.

Traci Brynne Voyles, Ph.D. is an Associate professor and Chair of Women’s and Gender Studies at Loyola Marymount University. She is the author of Wastelanding: Legacies of Uranium Mining in Navajo Country (Univ. of Minnesota Press, 2015) and winner of the Border Regional Libraries Association’s Southwest Book Award. Voyles received her PhD in ethnic studies from the University of California San Diego in 2010, and was a visiting assistant professor of history at the University of California, Davis in 2011 as part of the Andrew Mellon Environments and Societies Research Initiative. Her research interests revolve around environmental justice, environmental history, feminist theory and gender studies, ecofeminism, and comparative ethnic studies. Her current book project, Bound for the Sky: The Salton Sea and The Impossibilities of American Environmentalism in the Borderlands, explores the environmental and cultural history of southern California’s Salton Sea.

Amanda K. Wixon is a Ph.D. student in Native American History at the University of California in Riverside. She also serves as the Assistant Curator at Sherman Indian Museum in Riverside. She is a contributor and co-editor of the upcoming book Sharp Minds, Strong Voices: Twentieth Century Activist American Indian Women of the American West. Wixon’s research interests are in public history, American Indian identities, boarding school histories and Native American art. Her dissertation focuses on the built environment of Sherman Institute (now Sherman Indian High School) and methods of assimilation used to “civilize” Native youth. She is a Chickasaw Nation tribal member and a granddaughter of a graduate of Chilocco Agricultural Indian School in Oklahoma.

During the spring 2018 semester, ACTI will take up several topics that are of particular relevance to LMU in its particular physical, historical, and societal location.  The "LMU and Place" series asks participants to consider the challenges and opportunities that face us in virtue of our placement here and now, including the necessity of grappling with contested and problematic historical legacies; the ethnically and religiously diverse, and largely immigrant, context of Southern California; and the interplay between LMU's institutional Catholic and Jesuit identity and the increasingly pluralistic demographics of its faculty, staff, and students.  Other "LMU and Place" events: "A Conversation with Archbishop Gomez" and "Diversity and Difference at the Catholic University." 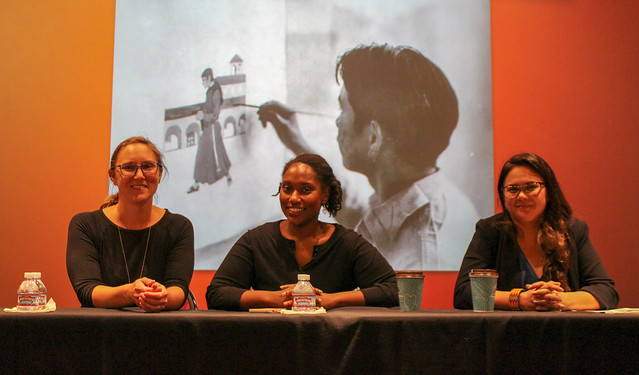